After playing on the girl’s tennis team for six years, it was crazy for me to think that my last season on the team is over. I have built so many new friendships and discovered what it truly means to be part of a team. It has been an honor for me to be part of such a special team like Girls Tennis, and every year I look forward to a new season with new players. After losing three seniors, most of our starting lineup this year returned, and we brought up four new younger players. Similar to our team, our league opponents also did not lose many seniors. We went 3-2 in our league, playing tough matches against Rye Neck. Even though we may not have won the league, I am still so proud of everything our team accomplished this year and grateful that we could have a season filled with many competitive matches. Our coach, Mr. Klurfeld, said, “On one level, I feel really fortunate that we had a season at all. Many sports haven’t been so lucky this fall. And beyond that, I’m proud of how our players continue to compete and always participate with tremendous sportsmanship. Given the brief pre-season, I’m happy with our play this year.” The competitive matches, friendships I have made, and the leadership responsibilities that I was able to obtain while being rewarded captain my junior and senior year are opportunities that I will never look away from. 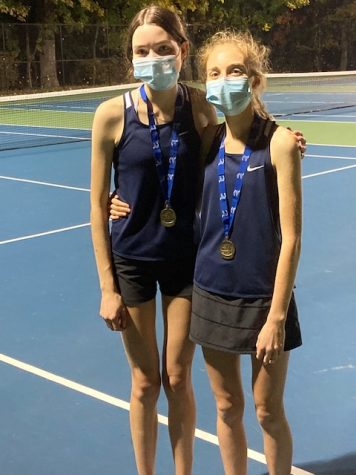 This season senior captain Rory Christian and myself both played singles during the season. However, we knew after being on the varsity team together for four years and playing doubles sophomore year that we would want to end our last post-season together. We played as a doubles team in the 2020 Girl Tennis Southern Westchester Small School Region Tournament and were ranked the number 1 seed. On Sunday, November 8th, we won the semi-final match against Rye Neck 8-1 to advance to the final, which was played against Irvington on November 10th. The match was held under the lights, which definitely made it feel more real. In the first couple of points, my heart was definitely racing as the match was getting started, the sun was setting, and the lights were beginning to shine. Rory and I won the first set 6-1, and going into the second set, our opponents started to play harder, but Rory and I continued to fight back. At six, all in the second set, we went into a tie-breaker to decide if Rory and I would win it all or go into the 3rd set tiebreaker. With Rory and I up 6-5 in the tiebreaker to 7, my heart was racing as I got ready to receive the possible ending point. During the point, all I could think about was getting the ball in the court, as my heart kept pounding and pounding each time I hit the ball. After a long rally, I saw our opponent hit the ball that slowly went into the net, and Rory and I had just won the Girls Tennis Southern Westchester Small School Region Tournament. We have worked for this moment for four years, and it was so great to end this journey with a victory.

To Mr. Klurfled and all of the girls on the tennis team, thank you for making these past six years a time I will never forget. I can’t wait to see all that you accomplish, and good luck next year!