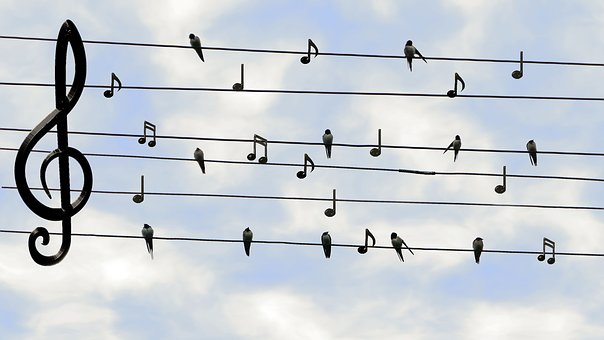 Birds are nature’s finest musicians. They can produce the prettiest of songs using their syrinx: similar to a human’s larynx (ie, voice box or vocal cords), the syrinx turns vibrations into sound, but since the syrinx has two chambers as opposed to the larynx’s one, birds can produce a greater variety of beautiful sounds. But did you know that some birds can also use their wings to sing?

In my past two Fancy Feathers articles, we’ve looked at the basic types and structures of feathers as well as their purpose and how some birds have the most elaborate feathers for display. Now, let’s take a look at one particularly strange use of feathers—sound production.

Male Club-Winged Manakins of Latin America have a unique feather structure that allows them to produce a powerful one-note tune to attract mates. But how exactly they do this remained a mystery in the bird world, at least until Cornell researcher Kim Bostwick cracked the code—quite literally!

Through qualitative observation, researchers have found that male Manakins flips their wings above their heads and produce a high-pitched sound to attract mates. Using a high-speed video camera, they measured that the Manakin’s wing tips knock together 107 knocks/second, making it much faster than a hummingbird at 75 times/second; it is this that causes the sound, at least in part.

If the sound was only created by the Manakin’s knocking its wing tips 107 knocks/second, we’d hear a series of knocking noises since the frequency is too low. Instead, we hear a continuous pitch, characteristic of higher frequency sounds. Bostwick found that a Manakin’s wing song actually requires a vibration of ~1,500 times/second to create such a continuous pitch; so, for all 107 knock of a Manakin’s wings—forward and backward—each second, something else must be vibrating 14 times (14 × 107 ≈ 1,500) to create the continuous sound we hear.

At this point, Bostwick reached a roadblock—what was happening? Something was happening every time the Manakin beat its wing, causing it to produce a much greater frequency sound, but what was it? To answer that question, Bostwick turned to anatomy. She found that 2 of the Manakin’s wings had a very strange structure: one wing, which she called the pick wing, had an enlarged rachis so it looked like a club; the other wing, which she called the comb, was at a 45° angle and had 7 ridges along the rachis. Every time the Manakin knocked its wings together, the pick ran across the comb, 7 times forward and 7 times backward, causing a vibration—this is called stridulation, similar to what crickets do.

Bostwick had the answer! The Manakin knocks its wings 107 knocks/second and it stidulates its pick feather over its comb feather 14 times/knocks. With this, the Manakin produces sound at ~1,500 times/second, matching the frequency of sound we hear!

The Club-Winged Manakin is the only bird that stridulates specialized feathers to create such a beautiful sound, making it stand out quite a bit in the bird world. But there are so many other unique birds out there: everyone from pigeons to penguins have something unique about them. Go outside and take a look!