Science in School: Which came first, the Chicken or the Egg: Answered? 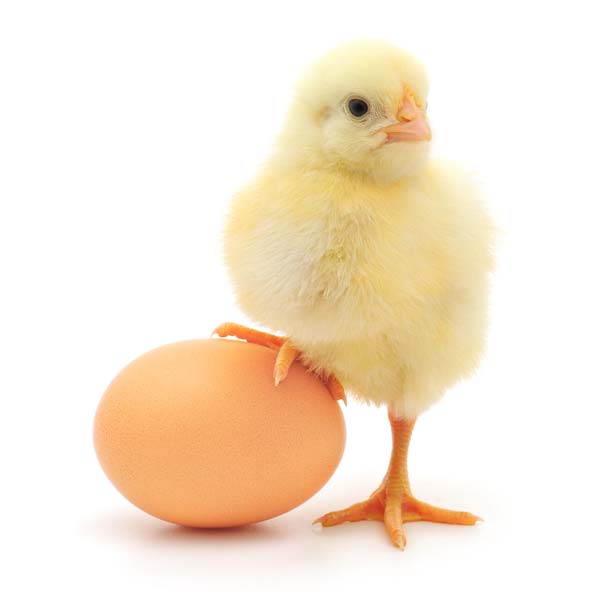 Biologists have a myriad of questions regarding the origin of life, but one thing is certain: life was formed through the process of self assembly. Self assembly, also known as bottom-up assembly, is when many little components come together to form a larger final product; this is in contrast to top-down assembly, when a large component is broken down into a smaller final product. Life was formed through self assembly as, first there were tiny cells that bundled together to form multicellular organisms, which then became the first plants and animals, leading us to today, when we have hugely complex organisms, everything from dandelions to humans!

Cells work when mRNA transcribes copies of DNA out of the nucleus and into the cytoplasm to be translated into proteins, the building blocks of all life; once the mRNA is in the cytoplasm, a factory-like ribosome will translate the mRNA into a protein with the help of tRNA.

Researchers found that when they left tRNA in a high-temperature cell-like environment, the tRNA molecules will self assemble into a larger functional unit that is capable of exponentially replicating information. With this, the researchers theorized that tRNA is a key link between the replication process of genetic information and translation process of protein-formation in the earliest living systems. This theory is supported by the fact that almost all early life has tRNA that looks almost exactly the same.

So, this study suggests that neither the chicken-like proteins, nor the egg-like genetic information came first – instead, there was the entirely different tRNA! There is, and likely never will be, a clear answer to the chicken-or-egg dilemma: in fact, as researchers learn more and more about the origins of life, the answer will just continue to become more complex and accurate. Learning about the role of tRNA in the origins of life – including avian life! – is a key finding for biologists in the study of evolution, one that will propel researchers to discover even more complex and accurate solutions to the chicken-or-egg dilemma.