In Light of the Pandemic, Cross Country Shines 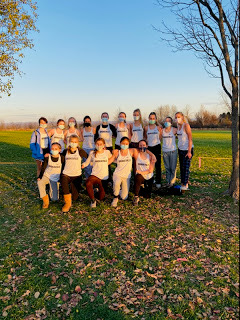 Although the Pandemic has taken a toll on many extracurricular activities, cross country has had a very successful season and has handled corona very well. Coaches David Ryan and Keina Samuels have done a very good job with practicing in a safe environment and keeping everyone healthy. One way the team is practicing safety is by wearing masks when running; although this has been difficult to get used to it controls the amount of contact with each other and other teams.

Captains Betsy Marshall, Avery Widen, and Rory Denning have also done an amazing job when putting the team together and practicing in these corona conditions. The team practiced at Twin lakes, the track, Van Cortlandt, the duck pond, and scout fields. While pre season was cancelled, the team had an extended season for meets and practice; this allowed runners to have a full season and not feel jipped. Unfortunately due to the pandemic, many of the social activities that come with fall sports were cancelled; this includes team dinners and the homecoming events. As for meets, we had some duel meets and some larger meets at Milton, an area in upstate New York. These meets were against many teams including Pleasantville, Irvington, and Eastchester. The Bronxville cross country team did outstandingly well in the meets and won the League Championship! With cross country runners in both high and middle school, I was able to interview some of the younger athletes. In the words of three of our eighth graders: Kailee Fino, Maddie Williams, and Linnea Hentschel; “Cross country is so fun and we are so excited to be a part of this great team.” The team has done such a great job this season even with the implications of the coronavirus; hopefully next year will be as good of a season!