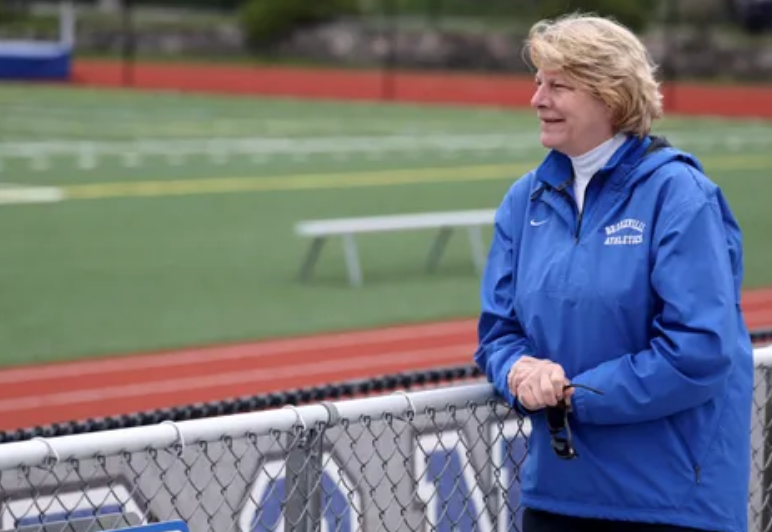 Three different sports. Three locations — all more than an hour’s drive from each other.

One athletic director hellbent on cheering everyone on.

And so, Agnello, a Bronxville guidance counselor and boys cross-country, skiing and spring modified track coach, and AD Karen Peterson did just that, driving back and forth to see boys soccer, field hockey and girls running cross-country.

“Athletic directors will typically go to basketball and football state championships,” Agnello said. “She’s been to cross-country states and swimming and every other thing in between. Call her full-immersion Karen. … She’s really into it. It’s not a see-or-be-seen type of thing.”

And it has been that way since the two started at Bronxville on the same day 22 years ago.

Peterson, whose unique resume includes heading programs and coaching at the Division I and III college level (she was Manhattanville’s athletic director immediately before joining Bronxville), is retiring after this spring.

The saying goes, “No one is irreplaceable.” But this might be an exception.

Bronxville, with section and state championships in multiple sports, is the little school that not only could but often does, and that, many coaches say, is because of Peterson.

Everybody has tried to talk her into staying, said varsity baseball coach Anthony Vaglica, who heads Bronxville’s Athletic Council.

“What strikes me most is the way she builds relationships with everyone and, through those relationships, builds a shared culture at Bronxville,” he said. “She’s the one constant. Anyone can lean on her. It’s where our success comes from.”

Perhaps the most striking thing about Peterson, coaches say, is her insistence on treating everyone — and all teams — equally.

Jim Mitchell, the legendary girls track & field and cross-country coach after whom the Bronxville track is named, was on the committee that selected Peterson as athletic director.

“She has been absolutely spectacular,” said the former longtime Latin teacher, who stopped coaching last spring after 53 years, 40 of them at Bronxville. “Karen has been a godsend to the Bronxville program. … She was really wonderful right from the start. She treated every sport fairly and equally, which is tough to do, particularly with parents of each sport wanting their sport to be number one.” […]

For the full article, read the original publication here at Lohud.com