Smoking and Vaping: What’s the Difference 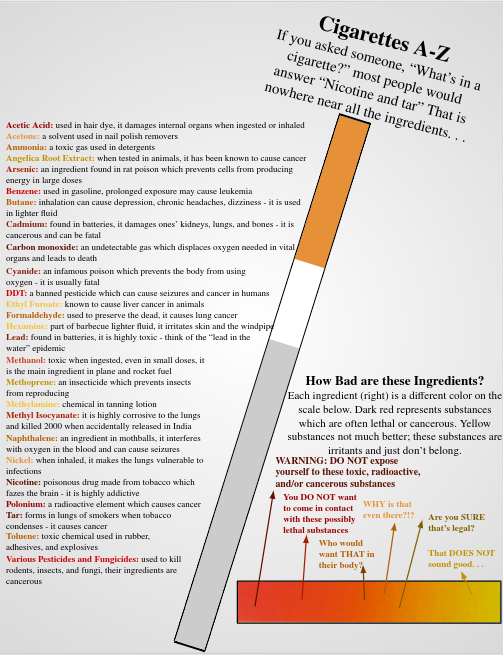 E-cigarettes are supposed to be a “new and improved” version of traditional cigarettes. But is there much of a difference between smoking and vaping? In both cases, users inhale a combination of addictive nicotine, harmful chemicals, and destructive substances. Smoking, both cigarettes and e-cigarettes, causes one in five deaths each year in the US. Both have their downfalls, including the numerous strange, dangerous substances in smoking products. Let’s take a look… 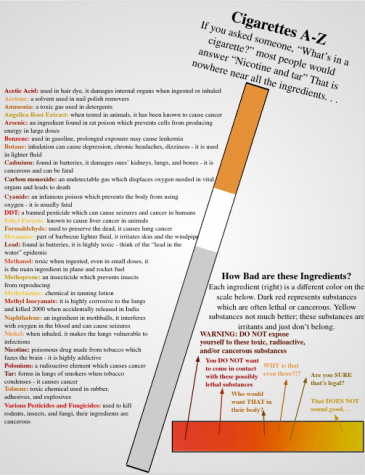 40 million adults in the US smoke cigarettes and 16 million people are diagnosed with severe illnesses related to smoking cigarettes. It costs the US $170 billion annually to treat these people. So many people smoke, but do they even know what they’re inhaling? What they’re subjecting the people around them through secondhand smoke? There are 600 known substances in cigarettes and cigarette smoke releases over 7,000 harmful chemicals. 70 of these chemicals are carcinogens, meaning they cause cancer.

All e-cigarettes include a battery that heats the “e-juice” until it is gaseous. When the e-juice is heated, however, innumerable detrimental chemicals are formed. The user would inhale the aerosol which is made of nicotine, flavorings, metals, chemicals from the heating process, and substances from the e-juice. Many of these gaseous substances will go to the users’ lungs and condense into a liquid. Many of the ingredients of e-cigarettes are a mystery – a fatal one, too! As of now, nine people have died of a “mysterious vaping illness” but scientists don’t even know why. How many more people will be hospitalized or even die because of vaping products? New York and Michigan prohibited flavored vaping products, but is this enough? Everyone, including high school students, must know the detrimental effects of e-cigarettes. Who would use an e-cigarette, knowing the horrendous substances in it? 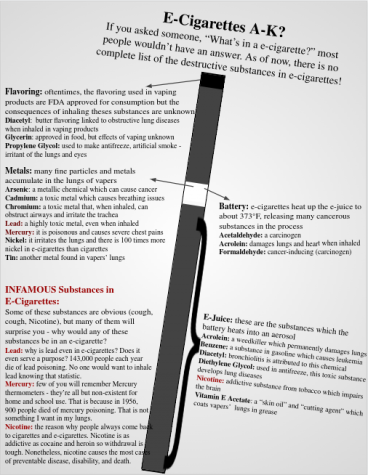 Many e-cigarettes, including Juul, advertise that e-cigarettes help smokers quit, but this is not quite true. The FDA has banned the “Make the Switch” campaign because it implies wrongfully implies e-cigarettes are healthier than normal cigarettes. In reality, scientists are not yet sure which is “better.”

After reading about the different ingredients in cigarettes and e-cigarettes, it is clear that both are equally awful. Some of the ingredients seem crazy: why is methanol, rocket fuel, in smoking products? Others are flat-out dangerous: mercury? Lead? Schools do not use mercury thermometers because they are unsafe. Overall, the combination of weird and harmful substances in smoking products leave one thing clear: neither smoking, nor vaping is good.